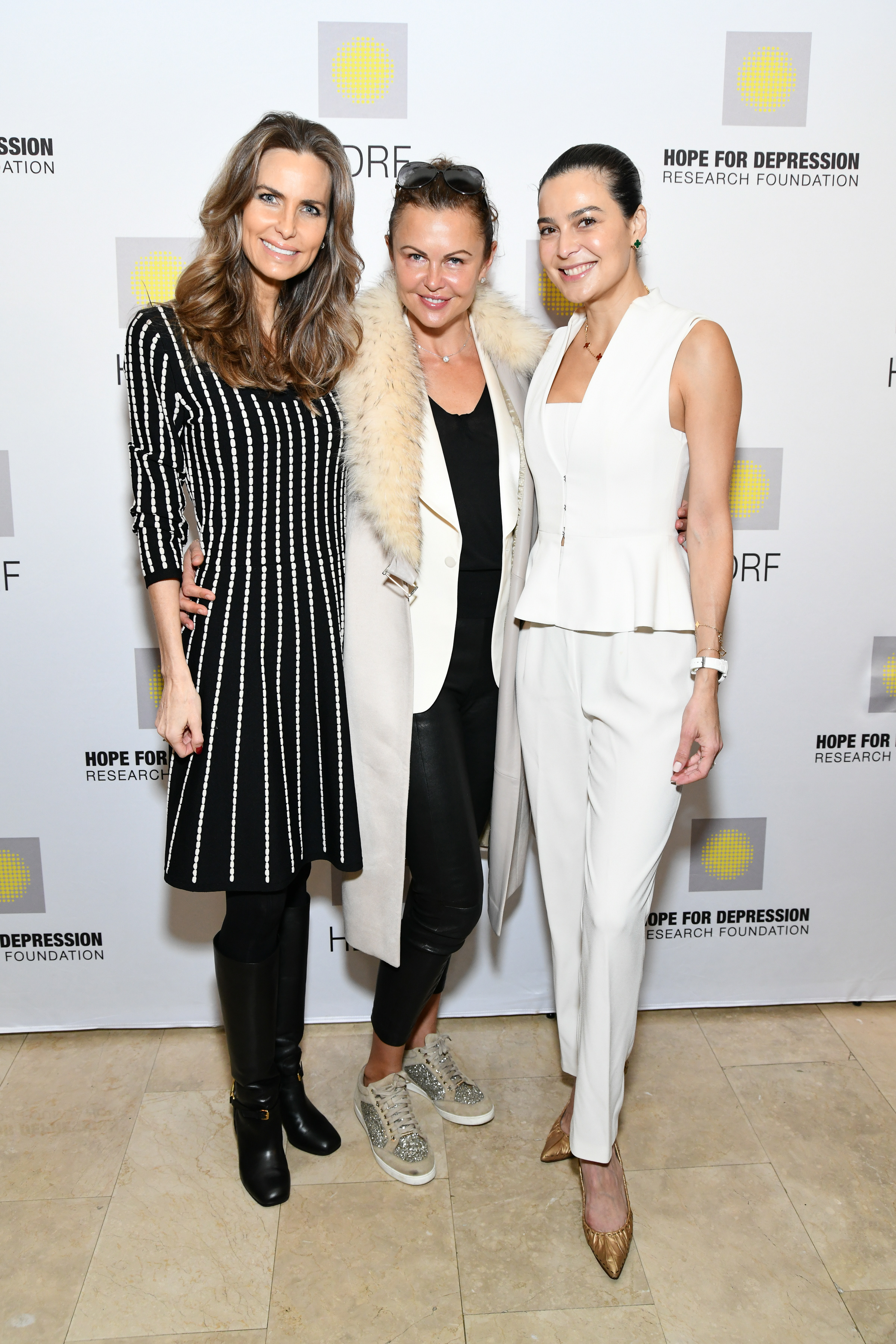 On Tuesday, November 6th, Hope for Depression Research Foundation (HDRF), the leading non-profit dedicated to advanced depression research, held its 12th Annual HOPE Luncheon Seminar at The Plaza Hotel.  The seminar focused on “Brain Health and Wellness” with leading scientists and psychiatrists taking the stage to talk about the transformative benefits of meditation, diet, sleep and exercise.

The day culminated with author, actress and comedian Ali Wentworth, who made the room of 300 people laugh with humorous insights about her own experience with depression and psychiatric treatment. She was honored with the 2018 HOPE Award for Depression Advocacy.

Master of Ceremonies Chuck Scarborough began the event on a more somber note with a review of the year’s headlines in mental health, including the tragic suicides of Anthony Bourdain and Kate Spade. He reminded the audience that depression and suicide are on the rise, and that HDRF’s mission to find new and better treatments for depression is more urgent now than ever.

The keynote speaker, acclaimed neuroscientist Richard Davidson, PhD, then came to the podium to speak about the fundamentals of emotional well-being. Dr. Davidson is the Founder and Director of the Center for Healthy Minds at the University of Wisconsin–Madison. He is personal friends with the Dalai Lama and is a prolific writer on the topic of brain and emotion as well as the benefits of meditation.

He explained that his extensive brain research indicates that well-being is a skill we can develop by focusing on four components: awareness/attention,connection, insight and sense of purpose. He said that a wandering mind is an unhappy mind, and pointed out that in modern life, the average adult’s mind wanders 47% of the time. This sent a titter of nervous laughter through the audience.

Diet, sleep and exercise and their link to brain health was the topic covered by the next speaker, psychiatrist Dr. Samantha Boardman of Cornell Weill. She stressed that nutrition is as important to psychiatry as it is to cardiology or gastroenterology.

Dr. Boardman cited a study in which subjects ate only fatty and sugary foods and developed impairments in learning and memory in four days. Another study shows that young adults who ate more fruits and vegetables every day reported improved vitality and motivation in as little as two weeks. In keeping, she always recommends a Mediterranean style diet that emphasizes fruits, vegetables, fish, nuts, and unsaturated oils like olive oil.

Sleep and mental health go hand in hand, Dr. Boardman said. People who don’t sleep enough are less inclined to interact with others, robbing them of healthy social bonds, studies show. Furthermore, when we lack sleep, other people perceive us as socially repulsive, creating a vicious cycle that may be contributing to the public health problem of loneliness. Dr. Boardman told the audience to cultivate better sleep habits by leaving screens out of the bedroom. She said 90% of young adults sleep with their cell phone in bed. Even more shocking: 1 in 3 smartphone owners say they would rather give up sex than their phones.

A sedentary lifestyle is worse for your health than smoking, diabetes and heart disease, Dr. Boardman said.  She added that most of us sit still for 13 hours a day, not including sleep hours. We cannot assume regular visits to the gym are sufficient. We need to move more in general – stroll around the block at lunchtime, take the stairs instead of the elevator, walk instead of calling a cab. Evidence clearly shows that being active and spending time outdoors improves our resilience, motivation and positivity.

HDRF Founder & Chair Audrey Gruss turned the focus of the day to the advanced research of HDRF’s team of acclaimed scientists, The Depression Task Force. She announced that the team has recently published a major study that points to a potential blood test for depression and new category of anti-depressant that is faster-acting and with fewer side effects than current medications in use for the past 30 years.

Audrey Gruss then presented Ali Wentworth with the HOPE Award for Depression Advocacy saying, “with keen observation and humor, she demystifies a very serious topic by inviting us all to pull up a chair and chat with her.”

Ms. Wentworth took to the stage and joked, “My mother is an über-WASP, and when I was growing up, we didn’t talk about feelings or issues… I went through a depression in my twenties and I was in therapy and taking Zoloft, and I called my mother up and I said, ‘Is there any depression in our family?’ and she said ‘Nope, no depression.’ I said, ‘All four of my grandparents killed themselves, that’s not depression?'”

She went on to speak about how attitudes have changed around what used to be a taboo subject; she can see it in her daughter and her daughters’ friends who are speaking much more openly about mental health. “I’m very proud of her because we talk about anxiety as much as the Kardashians… 99% of the time.”

ABOUT HOPE FOR DEPRESSION RESEARCH FOUNDATION

HDRF’s mission is to fund the most innovative neuroscience research into the origins, diagnosis, treatment and prevention of depression and other mood disorders – bipolar disorder, postpartum depression, post-traumatic stress syndrome, anxiety disorder and suicide.

In 2010, HDRF launched its Depression Task Force – an outstanding collaboration of eight leading scientists, at the frontiers of brain science, from different research institutions across the U.S. and Canada. These scientists have developed an unprecedented research strategy that integrates the most advanced knowledge in genetics, epigenetics, molecular biology, electrophysiology, and brain imaging. To accelerate breakthrough research, they share ongoing results, in real time, at the HDRF Data Center. For more information, visit: www.hopefordepression.org