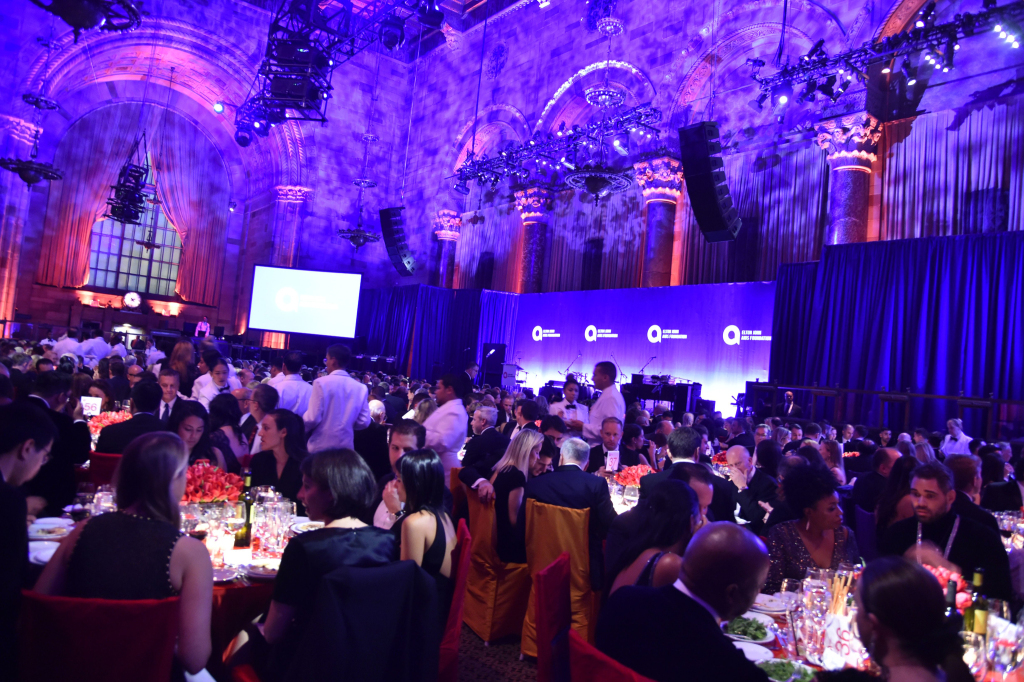 The well-attended event honored Patricia Hearst, Joe McMillan and Darren Walker, with a performance by Sheryl Crow during dinner.

Twenty-five years and counting. The Elton John AIDS Foundation has outlasted the careers of many pop stars, thanks to the unwavering dedication of its founder, Elton John and his husband, EJAF chairman David Furnish.

“When you visit people who have had the benefit of the money raised that we’ve given them, and see the gratitude they have, no matter how worn out you might feel, it just fills you up with energy,” John said during the EJAF’s annual An Enduring Vision gala benefit at Cipriani 42nd Street on Monday night, a few nights before his Farewell Tour performances at Madison Square Garden. “They’re so grateful that people care who don’t live in their country but from abroad and people give them money to have a decent life, decent medicine and hope. And when they’re very happy, they make me very happy. So you come back and start the process all over again.”

As for the foundation’s plans for the next 25 years, Furnish offered a direct goal: “Just to end AIDS by 2030. That’s the milestone that we have, and we think we’re on our way to doing it,” he said.

The well-attended event honored Patricia Hearst, Joe McMillan and Darren Walker, with a performance by Sheryl Crow during dinner.

“I’ve been a longtime supporter, and when they asked me I said yes, mostly because this is the only one I would say yes to I think,” Hearst said of the honor.  “Because it’s HIV and AIDS, and it’s Elton and David, and they just do so much worldwide. I think it’s a wonderful foundation; the work that he does is so selfless and really important.”

The event was packed with celebrities and business heavy weights alike — including Robert Kraft, who host Gayle King gave a shout-out during dinner. (“We should say congratulations to Robert Kraft because the Patriots won yesterday,” she said, as the camera cut to the sports team owner’s beaming face on large screens set up inside the event hall.)

One woman in a beaded red gown waited for a man with long hair to finish an interview with a reporter before swooping in for a selfie. “Who was that guy?” she whispered, as he walked away with his date.

That guy happened to be Tom Payne of “The Walking Dead” fame. The actor was in town for the event one day after attending a Comic Con in Rhode Island.

“I feel very fortunate to be in a position with my job to play a member of the LGBTQ community, and with that be welcomed into the community,” he said. “We got invited to Elton’s party at the Oscars at the beginning of this year, and that was an amazing honor — and that was one thing, but this [party] is to come out and celebrate what amazing work this foundation does.”

Light has been a longtime supporter; she’s been involved since the very beginning of the initiative in the early Eighties.

“When we began to find out our friends were dying,” said the actress, clad in a fully sequined Christian Siriano gown, “Elton took up this mantle and started really being out there and supporting people and making sure people remember that AIDS is still with us. That it’s not over, and making sure that people were taken care of and knew they were loved and that they were supported if they found out they were HIV positive. For me, to make sure that people are taken care of and that they’re not discriminated against is just about the most important thing that we can all do for each other. Particularly at this time. It’s a very big day tomorrow.”

Election talk was heavy on people’s minds — and in their conversations — throughout the night. The event opened with a powerful 20-minute speech rooted in the political given by Bryan Stevenson, founder and executive director of the Equal Justice Initiative and the New National Memorial for Peace and Justice in Montgomery, Alabama. Afterward, John paid tribute to another longtime EJAF supporter; last year, the late Aretha Franklin performed during the benefit.

“We witnessed what turned out to be the final performance of the queen of soul,” John told the crowd. “We were sobbing, you don’t see greatness like that very often, we will never see it again. And we saw it at our event,” he added. “She raised the roof and she sang and she played and we made us all weep — and she gave us the performance of a lifetime.”