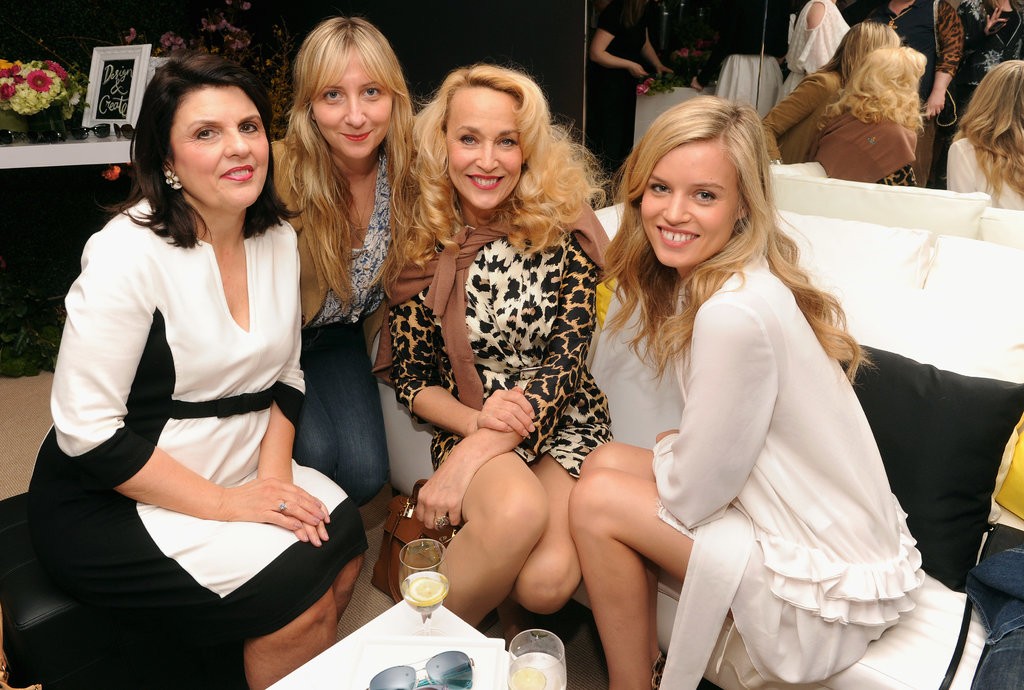 During a recent operation to repair a metal rod in her hip, Susan Miller says she briefly died on the table. But there were no white lights, and she woke up with no divine realizations. Instead she began seeing disturbing, recurring visions of what looked like meteorites flying at her when people were framed a certain way by the light.

She says she was mid-interview with a reporter from the New Delhi Times when she saw a “great big meteorite” zooming toward her. She burst into tears.

Ms. Miller says she later discovered a possible meaning to these new visions.

The meteors she was seeing, she realized, were memories of her view from the operating table when she was resuscitated. The shapes were simply “the light above you when you’re being operated on, and the doctor is in front of that light,” she said.

A Chanel-clad Upper East Side mother of two, who looks and dresses not unlike Jackie Kennedy, Susan Miller still talks about her life with the wide-eyed wonder of a child who has just seen a reindeer fly. Ms. Miller’s enduring appeal — she has been the dominant publishing astrologer for decades now — seems to stem from the fact that she talks about everyone else’s lives with the same practical marvel.

Her work is also exuberant. Her monthly horoscopes can clock in at 40,000-plus words, organized into long, winding essays that offer her readers encouragement and advice pegged to the good or bad omens she sees in the planets. She describes herself as a “philosopher who uses astrology to get at life’s mysteries” and says she would have been either a nurse or a reporter if she had to do it differently.

Her forecasts aren’t always accurate, in part, because astrology, though rooted in ancient history and inexorably linked to self identity in the age of social media, isn’t a real way to predict the future. In early 2016, Ms. Miller predicted, for example, that Donald Trump would “wobble and won’t make it to the election” and that Hillary Clinton’s “email scandal isn’t resurfacing, and there won’t be others.” She did, however, correctly predict Prince Louis’s birth week, Beyoncé’s wedding year, Britney Spears’s comeback and President Obama’s re-election.

Ms. Miller’s official stance is that practicing astrology can give her insight into the circumstances of the future, but not necessarily the outcome. Unofficially, it seems the planets serve foremost as creative writing prompts for kindly advice on living what she deems a “wholesome life.” She is unfailingly positive: No matter what happens, she reassures her followers each month, you’re going to be fine, and if you’re not, here are some ways to cope. It’s not unlike a mental health counselor armed with star charts instead of a DSM-5.

Ms. Miller put it best in a 2001 interview with CBS, summing up her work as a tool for “problem solving or creative thinking.” She provides hypotheticals, and her readers try them on for size.

“Socrates said an unexamined life was not worth living. That’s pretty dramatic, but it’s kind of true. The better part of many actions is the thinking you do ahead of time,” Ms. Miller elaborated 17 years later over dinner in Midtown Manhattan. “A woman once told me, ‘I love your stories about my life.’ I had never thought of it that way.”

An enduring endorsement from Hollywood hasn’t hurt her popularity. Many of the people who seek out Ms. Miller to ghostwrite their life stories are investors with questions about the best time to start a deal (this summer, it was not until after July’s eclipses had passed) or where the next boom will be (Ms. Miller says all signs point to cryptocurrency).

But Ms. Miller’s orbit has also long been populated with stars of the corporeal sort. Cameron Diaz asked her for advice before purchasing real estate. She’s done readings for the designer Raf Simons. The actress Kirsten Dunst is a fan, and so is Lindsay Lohan, and so is Katy Perry. The set of “Outlander” apparently just shuts down for a reading break when she posts. When Emma Stone wanted to learn astrology, she called up Ms. Miller for help. Anderson Cooper’s mother, Gloria Vanderbilt, contributes watercolors to accompany Ms. Miller’s horoscope calendars, which she sells for $19.99 but hands out for free when the planets align her with a potential new friend. After bumping into each other at a party, Jennifer Aniston volunteered her condolences that Ms. Miller’s mother had died and Ms. Aniston’s then-partner Justin Theroux invited Ms. Miller to have dinner at their home.

The calls go both ways. Years ago, when Ms. Miller’s rental building converted to condos and residents were told to buy in or move, she says she enlisted the help of the Smashing Pumpkins, who wrote the tenants a protest song called, “Don’t Take Our Skyscraper Away.” (She ended up purchasing the three-bedroom apartment and still lives there today. Her now ex-husband does not.) It’s a trait she’s passed on to both her youngest daughter, Diana, who books talent for the James Corden series, “Carpool Karaoke,” and her eldest, Chrissie, who is currently working on celebrity partnerships for the eyeglasses company Warby Parker. As a young adult, Chrissie once hosted so many celebrity friends at her apartment that the space became the subject of its own New York Times profile, though she’s said in recent interviews people are more star-struck now by the fact that she’s Ms. Miller’s daughter.

Talking to Ms. Miller is, frankly, a delight, and I feel confident I would say this even if she hadn’t told me that I’m destined for financial success in the last month of 2019 as Jupiter enters Capricorn. Within minutes of meeting, Ms. Miller determines that we are going to be friends, and invites me to share a plate of asparagus with her, which she accurately predicts will be delicious. The only people she’s not friends with, it seems, are the people she hasn’t met yet. Once, she recounts fondly, the musician Pharrell Williams invited her to an event with Neil deGrasse Tyson, the renowned astrophysicist who despises astrology.

“I had a dinner with Pharrell and his wife a few months later, and I said, ‘Neil deGrasse Tyson was nice to me.’ Pharrell said, ‘No he wasn’t! He gave you a hard time on Mercury retrograde, and I won’t let him live it down.’ I said, ‘Oh Pharrell, he was O.K. He was nice to me. I was scared but he was respectful,’” Ms. Miller says. (A rep for Mr. Williams confirmed the story: “He loves her.”)

Whether you believe in her methods or not, though, Ms. Miller is devoted to providing advice for you and the other millions of readers who visit her site when she distributes her free horoscopes, usually on the first of the month. To supplement her income, she offers even longer forecasts for what she says is about half a million paying app subscribers, writes regular columns for a handful of magazines including Vogue Japan and has a partnership in the works with her favorite hotel, the Four Seasons Los Angeles in Beverly Hills.

Here it is necessary to address the situation surrounding Ms. Miller’s forecasts, which is that they are often published days, and sometimes weeks, past her self-imposed deadlines, and often without a satisfying explanation. One summer, a particularly late July column made tabloid headlines replete with quotes from her readers, who found themselves incapacitated from having to start the month off blind.

Her fans know from reading about her over the years that these delays are usually related to unforeseeable flare-ups from chronic illnesses she says have plagued her since she was left bedridden for a year with a rare disease at the age of 14. Since then, she says, she’s undergone dozens of surgeries, and been in and out of the E.R. with broken bones, recurring infections and symptoms of muscular degeneration. Her eyesight is failing, and she says that earlier on the day we spoke she took a breath test for the gastrointestinal disease ulcerative colitis. Or maybe the breath test took place four years ago. Like Ms. Miller’s forecasts, her medical history does not follow a strict linear narrative, and she breaks off on tangents and circles back many times. All you really need to know is that she’s sick quite a lot, and so sometimes, she says, she takes longer to write than she anticipated.

Ms. Miller’s mother taught her the art of astrology while she was bedridden as a teen. She also accurately predicted her daughter’s career trajectory.

“My mother said to me, when I was 9 years old, ‘You’re going to write, and God knows what you’re going to write about. I’m going to work on your grammar,’” Ms. Miller said. “She also said, ‘When you get to being close to 40, some newly invented form of communication, so new we don’t know the name of it yet, will change the way you work and be the channel in which you make your ultimate contribution to the world.’”

So when Time Inc. approached Ms. Miller in 1995 to write one of the first-ever internet astrology columns after she impressed an executive with a reading, “I thought, this is what she always thought for me. And she always said, ‘Go with the newest, the latest, the greatest. Even if you’re afraid of it, keep going toward it.’” Ms. Miller licensed her forecasts to the company for four years, jumped to Disney in 1999 and finally went independent in 2001, where she’s been ever since.

Still, there’s a more cynical explanation for her mother’s prediction. Later in the conversation, Ms. Miller mentions the age 40 again.

“My mother used to say this over and over, ‘When you’re 40, you’re gonna have to have a plan.’ I said, ‘Why do you say that?’” Ms. Miller said. “And she said, ‘Well, companies say produce or get out. So you have to produce or get out, and at 40, they could hire people younger.’ I had no idea what she was talking about. I wasn’t even in college yet. But she was right.”

Stepping aside from the question of whether Ms. Miller’s success was preordained or knowingly incubated, the two lines of reasoning can still comfortably coexist, for both Ms. Miller, who has centered her life around the idea that it is ruled by fate, and for a nonbeliever who, considering her rapidly approaching, now-inevitable fate as a wealthy woman, might feel well emboldened to pursue the outcome on her own.

Then again, maybe nothing matters, and we’re all just characters in a simulation playing out on someone’s laptop. There’s really only one way to find out.

As a child, Ms. Miller said, “I would ask my father and mother, ‘Is there a Santa Claus?’ They said, ‘Of course.’ Because they meant that Santa Claus is love.”