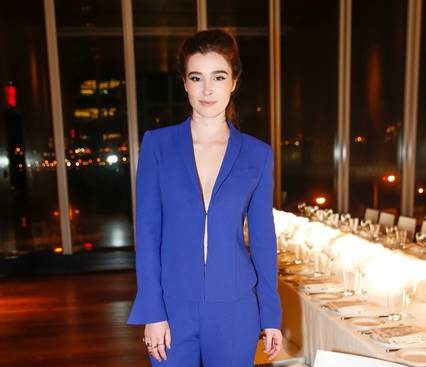 In magazines, blog posts, tweets and photo tags, Nell Diamond’s name often appears alongside a who’s who list of tony partygoers. Born in London, and educated at Princeton and Yale, she is the doyenne of under-30 socialites—an “It Girl,” according to a recent profile in Vogue: young, beautiful, hyperfashionable and rich.

In 2014, Diamond’s fairy-tale and fireworks wedding to longtime boyfriend Teddy Wasserman at the Hôtel du Cap-Eden-Roc in the South of France lit up social media sites and magazine web pages from Town & Country, Vogue and Harper’s Bazaar to the U.K.’s Daily Telegraph, and likely raised the bar for every future celebrity and royal wedding to a point slightly beyond reach. The photograph of her Olivier Theyskens–designed gown with twelve-foot-wide, ten-foot-long train trailing down the hotel’s broad gravel boulevard at dusk is the quintessential statement of elegance and extraordinary luxury. It is the kind of image you might see displayed in a new silver frame, the one you hate to remove because its replacement would seem too pathetic by comparison. 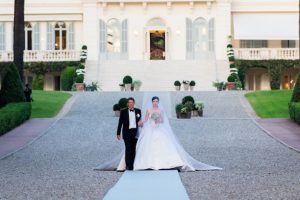 Today, at the Crosby Street Hotel in SoHo, the 27-year-old daughter of former Barclays Bank CEO Robert Diamond is eager to put that partying reputation to rest. “I like to go to interesting events and meet interesting people, but I am a serious person too,” says Diamond, who is wearing a dress from La Ligne, her close friend Molly Howard’s new label. From the colorfully embroidered monogram of her bag to the tincture of eggshell blue that peeks through her open-toe shoes, she looks like a burst of spring. Rather than talk about her stature as an It Girl, she prefers instead to discuss the power of sleep, women in the workplace and the inspiration behind her new luxury bedding venture, Hill House Home.

“It doesn’t matter how many times you go to SoulCycle or how much kale you eat: if you’re not sleeping well none of that matters,” says Diamond, admitting that there have been times in her life when she’s had difficulty sleeping. “But by taking measured steps, the quality of your sleep is something you can improve. I look at decorating your bedroom and your home the same way—not to be complacent, but rather to make conscious choices, which is the entire basis of Hill House Home. Just as you can take steps to have a better career, you can improve your surroundings and the way you interact with your environment, and ultimately the way you sleep.”

In January, with a kickoff fete at the Standard High Line hotel—attendees included Prabal Gurung, Claire Distenfeld, Monique Péan and Bee Shaffer—Ms. Diamond officially launched her online-only company, named for the London school where her older brother studied as well as a street near the Yale School of Management, which she attended after resigning from her trading position at Deutsche Bank in August 2012. After studying the market for home goods, she recognized that sheets, in particular, were an underserved category in terms of price, quality and design. And so they became the core of her business. 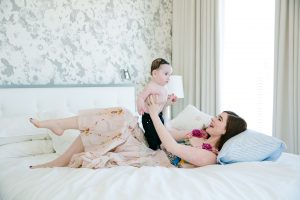 Motivated by an obsession with quality bedding and perhaps a mild to moderate love of napping, Diamond built Hill House Home with a solid business plan. Sheets are made from 100 percent Supima cotton, grown in the United States; woven into fabric at an Italian mill just outside of Milan; and then cut, sewn and finished at a family-owned factory in France. The collection is currently offered in five designs—Ivy, Chancery Lane, Vale, Waverly and Savile—and available in four sets or as separates. Accessories include a line of unisex terrycloth bathrobes and sateen pajamas for both him and her.

The website includes a blog called 40 Winks, where both the sleepless and the well-rested can find tips on how to take the perfect daytime nap, properly fold previously wadded fitted sheets, or decode the jargon behind the myth of thread counts.

The plan is to establish Hill House Home as “the” sheet experts, the company that people go to when thinking about their bed and their bedroom. Afterward, Ms. Diamond says she would like to build out the business into a home and lifestyle company, applying the same kind of strategy that she applied to the core business—not just create something that exists in the market already, but something new that adds value to people’s lives, whether that value is an easier online customer experience or a less expensive product, or whether the value is a fresh design that people have never experienced. “People define value in different things. I want to add value to people’s lives when they shop for their home,” she says.

It is this concept of home that seems to be at the forefront of the young entrepreneur’s thoughts these days. She and her husband, who is a managing director at Deutsche Bank, are near completing a two-year gut renovation of their West Village apartment. They are also expecting their first child. How Diamond will balance new motherhood and the management of Hill House Home will be a challenge, one she is looking forward to, she says. A big part of that puzzle is perhaps to reexamine conventional expectations of career and home life, and redefine the way they complement each other.

“When I was in finance, I couldn’t see myself in any of the people who were older than me. I would look around and think, ‘There are no women over 30 here!’ So it’s very important to me,” Diamond says, “that I build a company that changes the conversation around what it means to be a woman who works.”

As Diamond plots this next chapter in her autobiography, she will have no shortage of female mentors to guide her. When she thinks about her career, she says she looks at the women whom she admires and from whom she derives strength and encouragement in the incredible things they are doing.

Among leaders and role models she considers inspirational: Emily Weiss, founder and CEO of Into the Gloss; Leandra Medine at Man Repeller; Sara Blakely, founder of Spanx; Oprah of course; and Arianna Huffington, author of the newly released book The Sleep Revolution and someone who also believes a day’s success depends on a clean, unlighted place and a solid night’s rest. 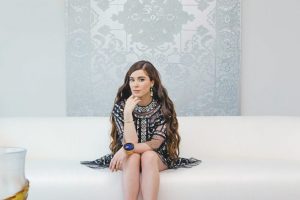 “When I consider my career I look to people whom I admire. I find strength and inspiration from women who are accomplishing incredible things. That motivates me,” she says. “I feel very strongly about the intersection between the state of women in the workplace today and the company that I’m trying to create. It’s important to me that I hire women. It’s important to me that I promote women.”